Ann Wigmore believed that there are two main causes of disease: deficiency and toxemia. Deficiency means that our bodies are undernourished because we cannot get the nutrients we need from undigestble cooked food. Toxemia is a term used to describe poisons that are stored in the body.

The Value of the Living Foods Lifestyle 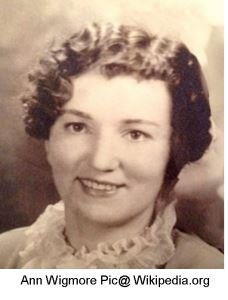 Ann Wigmore developed the Living Foods Lifestyle® to overcome disease and improve the quality of life. She believed that there are two main causes of disease: deficiency and toxemia. Deficiency means that our bodies are undernourished because we cannot get the nutrients we need from undigestble cooked food. Toxemia is a term used to describe poisons that are stored in the body.

These toxins are formed from eating unnatural, processed, and pesticide-tainted foods, as well as through destructive emotions and stress. Living Foods, which are easy to digest and rich in nutrients, combat this deficiency. The Living Foods Lifestyle® also addresses the problem of toxemia: when the body isn’t using all its energy to digest food, it can turn to other tasks, such as releasing stored toxins and healing.

…As a child, Dr. Ann learned about natural healing from her grandmother, who used plants, grasses, and herbs to heal soldiers injured in World War I. When, at age 50, she learned she had colon cancer, she turned to raw greens, blended seeds, and grains. Within a year, she was cancer-free. She began researching the healing properties of grasses, and soon settled on wheatgrass as her main focus. The Living Foods Lifestyle® uses wheatgrass as a nutritious elixir, as well as for colon cleansing…continue reading at annwigmore.org 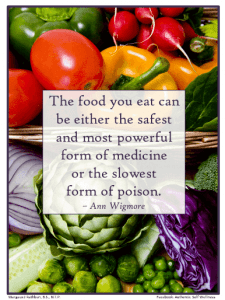 Ann, in poor health and suffering from colon cancer, began to incorporate the lessons she recalled learning as a child in Lithuania from her grandmother, the village doctor, who treated wounded soldiers with herbs during World War I. Using weeds and wheatgrass, she also healed her body and reversed the cancer. Witnessing the powerful healing properties of wheatgrass juice and other vitamin and enzyme-rich foods first-hand inspired her to spend the next 35 years of her life studying and educating others about natural healing and optimum nutrition.

Her first foray into helping others was through the “Red Schoolhouse,” which she founded at her farm in Stoneham in 1956. Dr. Paul Dudley White, a Harvard University-educated physician, member of the Harvard faculty, President Eisenhower’s personal physician and a founder of the American Heart Association, was one of Ann’s biggest supporters. He ran an “Underground Railroad” of sorts by sending patients who could not be cured using modern medicine to Ann’s farm. A fellow Lithuanian by the name of Viktoras Kluvinskas also became aware of Ann’s work through a Boston Globe article on the world-famous model Twiggy and the cleansing detox program she went through at Red Schoolhouse. The top computer consultant in the U.S. at the time, Viktoras’ services were coveted by institutions including Harvard, Smithsonian, MIT and The Apollo Project; he was also sick and dying from an autoimmune collapse when he came to the Red Schoolhouse to recover. After three weeks, he experienced a personal revelation and so when Ann offered him the opportunity to stay, he gave up his high-profile career and joined her to become the science and the brains behind the operation which, together, they renamed and co-founded as Hippocrates Health Institute.

Hippocrates Health Institute has welcomed people from all walks of life to benefit from her teachings – from people looking to improve their general health to those with terminal disease. To date, hundreds of thousands of men, women and children have visited the Institute and now share stories of recovery, healthy lifestyles, and a rejuvenated outlook on life. Read full article at Hippocrates Institute

Food poisoning is an illness caused by bacteria or other toxins in food. Symptoms of food poisoning are typically vomiting and diarrhea. These three can make you really sick:

Bacteria
Animal foods are the biggest source of bacteria. I’m sure you know about salmonella in eggs or chicken, listeria in pate’s or cheese and e-coli in meat. If you prepare raw food it’s important to be hygienic and store your edibles safely. But for raw food in a kitchen where these foods are prepared you have to be extra careful when you use cutting boards, knifes and plates. And make sure you wash your hands before preparing your food…

Parasites
I used to go to a kinesiologist who liked eating everything raw except for animal foods. She said they were full of parasites and worms and advised me to eat all foods raw except when comes from an animal, including meat (filet american, steak tartar), sushi, raw cow’s cheese….

You should know thought that cooking doesn’t destroy all parasite eggs and it is no guarantee to avoid these yacky creatures. (Otherwise, people who cooked their meals wouldn’t have so many parasites. But, it’s thought that 95% of the western people has some worms or parasites!)

Molds
Molds, fungus and yeasts. Some are relatively harmless, some can make you very sick. You may find them in mushrooms, cheese, sprouts, peanuts, other nuts, seeds and grains. etc. And as with the parasites, cooking them is not a guarantee for avoiding them. Think of cheeses and old bread, all cooked…

Esme Stevens is the president of Raw Food Europe and has the number 1 website for starters of a raw food diet: thebestofrawfood.com

Any cookies that may not be particularly necessary for the website to function and is used specifically to collect user personal data via analytics, ads, other embedded contents are termed as non-necessary cookies. It is mandatory to procure user consent prior to running these cookies on your website.