Are you searching for ways to fully
recover from any stage of cancer?

Welcome to the only Irish website that
provides detailed information
on all proven cancer treatments.

A type of drug that blocks the action of histamines, which can cause fever, itching, sneezing, a runny nose, and watery eyes. Antihistamines are used to prevent fevers in patients receiving blood transfusions and to treat allergies, coughs, and colds. – National Cancer Institute

This study concluded that women treated with antihistamines have a better overall and Breast Cancer specific survival compared with non users regardless of age, history of allergy, ER status and tumor stage. The results are strongest for Desloratadine use and use after Breast Cancer diagnosis.

The Karolinska Research suggests antihistamines such as Desloratadine or Loratadine may only need to be used for 6-10 weeks to deliver significant improvements in survival. 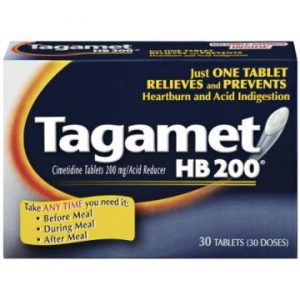 This study found: Cimetidine does not seem to reduce mortality in patients with colorectal cancer, but there seems to be a tendency toward a survival benefit in patients undergoing surgery for Dukes Stage C carcinoma.

This study says Cimetidine has anti-cancer properties that have been elucidated in a broad range of pre-clinical and clinical studies for a number of different cancer types. It says there is compelling evidence that cimetidine administration at the time of surgery may provide a survival benefit in some cancers.

The research suggests that you might use cimetidine for a year from one week after surgery to restrict loose cancer cells causing secondaries.

Attacking the steps of cancer

Cimetidine, or Tagamet, is a cheap over-the-counted medicine which was approved by the FDA back in 1977 and so is now off patent. It is a histamine receptor antagonist, and is used to treat stomach and duodenal ulcers and heartburn and indigestion. Histamines cause the stomach to produce acid and cimetidine stops this.

Cimetidine works against histamine receptor sites on the cell wall. And histamines seem to be required to bind cancer cells together. Trials have been conducted on other histamine-receptor antagonists but to no avail.

Research on Cimetidine in cancer treatment

The first report of cimetidine´s use with cancer was an article in The Lancet in 1979 (1: 882-883) which reported that it possessed anti-tumour abilities. It had been used with a lung cancer patient. Several studies with mice followed until another Lancet report showed it effective with melanoma patients, where it cleared up the ulceration of tumours.

A number of papers then appeared in the New England Journal of Medicine and The Lancet showing its effectiveness amongst patients after colorectal cancer operations, either used on its own or in conjunction with standard treatments. By 2002 the British Journal of Cancer reported a trial with 64 patients. The group without cimetidine showed a 10-year survival of 49.8, whereas the group also taking cimetidine had a 10-year survival of 84.6 per cent. In the group with the most aggressive cancers the figures were, without 23 per cent; with 85 per cent! The important conclusion was to give the drug before and during surgery.

This conclusion was reinforced by two studies one from Japan (Fujita Health University; Matsumoto; Lancet 1995; 346: 115) where the group taking cimetidine with the chemotherapy 5-FU had a 4-year survival of 96.3 per cent compared to the group on chemo only of 68.8 per cent. The cimetidine was given before the surgery. However, in a Danish study where it was started 3 weeks after surgery there was no benefit over the control group.

In our article, ´Can Surgery Spread Cancer?´we looked at various ways in which surgery may cause metastatic activity. Cimetidine may in fact help in two ways not just by its histamine-preventing activity stopping cells clumping together, but it just may boost the immune system as well.

In 1997 the journal Cancer (80: 15-21) reported a study by Adams and Morris where again the cimetidine was given before and during colorectal surgery. They looked at white blood lymphocytes before and after the surgery. Those patients taking the cimetidine showed an improvement in lymphocyte levels in more than half the subjects, whereas the placebo boosted the levels in under a quarter of the control group. Equally important was the follow up where 3-year survival was in line with the findings at the time of surgery. It is possible that this immune response as an independent benefit. But it is equally possible that it exists because the immune system has less work to do in the cimetidine group as it stops the formation of, and breaks down the adherence in, tumours.

Other studies have looked at prostate cancer and found similar improved survival figures.

If you are having surgery (especially colorectal surgery) you might be well advised to look into this cheap medicine and start using it in advance of the operation! It seems to be another excellent example of integrative, or holistic, cancer treatment in action. But tell your surgeon in advance and quote the research. He simply may not know!

There is some concern that Cimetidine has estrogenic properties. If you have breast cancer or prostate cancer, for example, this may be a concern.

Common side effects of first-generation antihistamines include:

It’s important not to underestimate the effects of antihistamine-related drowsiness. Some first-generation antihistamines can impair abilities such as co-ordination, reaction times and judgment in the same way that alcohol consumption can.

Therefore it’s very important that you do not drive or use power tools or heavy machinery after taking a first-generation antihistamine.

Less common side effects of first-generation antihistamines include:

Rare side effects of first-generation antihistamines include:

Contact your GP if you experience these rare side effects.

A few people will experience drowsiness after taking second-generation antihistamines. If you find yourself feeling drowsy, do not drive, drink alcohol or use tools or machines.

As well as drowsiness, other side effects of second-generation antihistamines include:

These side effects are usually short-lasting and should pass quickly.

Rarer side effects include:

Contact your GP if you have these rare side effects.

Antihistamines that are used to treat stomach ulcers are known as H2 receptor antagonists. Side effects of this type of antihistamine are uncommon but may include:

Antihistamines
Antihistamine medicine counteracts the action of histamine (a chemical released during an allergic reaction). For example, loratadine, hydroxyzine.

Source: HSE
Content provided by NHS Choices www.nhs.uk and adapted for Ireland by the Health A-Z.

Cimetidine is widely available in pharmacies.