Regular physical activity and the maintenance of a healthy body weight, along with a healthy diet, will considerably reduce cancer risk.World Health Organisation

Regular physical activity along with a healthy diet, will considerably:
reduce cancer risk.
reduce the risk of death from heart disease.
reduce other serious illnesses.
An active lifestyle such as doing housework and brisk walking helps to reduce the chance of getting breast cancer.
Moderate-intensity physical activity for at least 30 minutes on five or more days of the week, recommend.
Study found that people who engaged in leisure-time physical activity had life expectancy gains up to 4.5 years.

Source: The website of the National Cancer Institute (www.cancer.gov)

In addition to these health benefits, researchers are learning that physical activity can also affect the risk of cancer.

Selected References
1. National Center for Chronic Disease Prevention and Health Promotion and Centers for Disease Control and Prevention (1996). Physical Activity and Health: A Report of the Surgeon General. Retrieved June 26, 2009, from: http://www.cdc.gov/nccdphp/sgr/sgr.htm.

Those who think they have not time for bodily exercise will sooner or later have to find time for illness.Edward Stanley

Leisure-time physical activity is associated with longer life expectancy, even at relatively low levels of activity and regardless of body weight, according to a study by a team of researchers led by the National Cancer Institute (NCI), part of the National Institutes of Health. The study, which found that people who engaged in leisure-time physical activity had life expectancy gains of as much as 4.5 years, appeared Nov. 6, 2012, in PLoS Medicine.

In order to determine the number of years of life gained from leisure-time physical activity in adulthood, which translates directly to an increase in life expectancy, researchers examined data on more than 650,000 adults. These people, mostly age 40 and older, took part in one of six population-based studies that were designed to evaluate various aspects of cancer risk.

The researchers even saw benefit at low levels of activity. For example, people who said they got half of the recommended amount of physical activity still added 1.8 years to their life.

“Our findings highlight the important contribution that leisure-time physical activity in adulthood can make to longevity,” said study author Steven Moore, Ph.D., of NCI’s Division of Cancer Epidemiology and Genetics, and lead author of the study. “Regular exercise extended the lives in every group that we examined in our study—normal weight, overweight, or obese.”

The researchers also examined how life expectancy changed with the combination of both activity and obesity. Obesity was associated with a shorter life expectancy, but physical activity helped to mitigate some of the harm. People who were obese and inactive had a life expectancy that was between five to seven years shorter (depending on their level of obesity) than people who were normal weight and moderately active.

Physical activity has been shown to help maintain a healthy body weight, maintain healthy bones, muscles and joints, promote psychological well-being, and reduce the risk of certain diseases, including some cancers.

“We must not underestimate how important physical activity is for health – even modest amounts can add years to our life,” said I-Min Lee, M.D., Sc.D., professor of Medicine, Harvard Medical School, Cambridge, Mass., and senior author on the study.

If you don’t take care of your body, where are you going to live?Author Unknown


An active lifestyle such as doing housework, brisk walking and gardening helps to reduce the chance of getting breast cancer, new research shows today. The research – the largest ever looking at physical activity and breast cancer – is part of ongoing work by the European Prospective Investigation of Cancer (EPIC), a Cancer Research UK co-funded study and one of the biggest studies into the links between diet, lifestyle and cancer.

Previous research has estimated that more than three per cent of breast cancers, more than five per cent of colon cancers and around four per cent of womb cancers in the UK in 2010 were linked to people doing fewer than 150 minutes of at least moderate intensity physical activity per week.

Professor Tim Key, a Cancer Research UK epidemiologist based at the University of Oxford who works on the EPIC study, said: “This large study further highlights the benefits of being active – even moderate amounts. There is also a lot of evidence that exercise reduces the risk of bowel cancer. More research is needed on other types of cancer, and to investigate the mechanisms which could explain the links.”

The government recommends we do 150 minutes a week of moderate physical activity – such as brisk walking. But only 39 per cent of men and 29 per cent of women are managing this.

Sara Hiom, director of information at Cancer Research UK, said: “While maintaining a healthy bodyweight and cutting back on alcohol remain two of the best ways of reducing our risk of breast cancer, being active can clearly play a role too – but doesn’t have to cost you money or too much time.

“You don’t need to train like an Olympic athlete but the excitement of watching team GB win so many golds might have inspired some of us to spend less time on the sofa. And, as this research confirms, exercise can include anything that leaves you slightly out of breath like doing the gardening, walking the dog or housework.

“Small changes in your daily routine can make all the difference, like taking the stairs instead of the lift or walking some of the way to work, school or the shops and add up over the course of a week.”

“Keeping active could help prevent more than 3,000 cases of cancer in the UK every year. And it can have a positive effect on your health.” 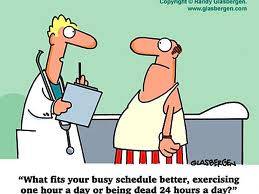 Note 1. Videos and images are not part of the original articles.
Note 2. Articles may be edited for content and length