Focused ultrasound works in the same way as rays of sunlight that pass through a magnifying glass and are concentrated at a single point, causing a significant temperature rise around the focal point.
Thermal ablation is a non-invasive (incisionless and radiation-free) treatment that has been used in humans since 1993.

Focused ultrasound treatments can be performed on an outpatient basis, require no incisions, and can result in minimal discomfort and few complications, allowing for rapid recovery.
Source: Focused Ultrasound Foundation

HIFU Focal Therapy is an effective, non-invasive set of treatments for men with early-stage localised prostate cancer. It has been pioneered and advanced in the UK by clinicians committed to offering men precision treatment options that effectively controls their cancer and preserves their quality of life.
Source: The Focal Therapy Clinic

This study says:
In clinics, HIFU has been applied to treat a variety of solid malignant tumors in a well-defined volume, including the pancreas, liver, prostate, breast, uterine fibroids, and soft-tissue sarcomas. In comparison to conventional tumor/cancer treatment modalities, such as open surgery, radio- and chemo-therapy, HIFU has the advantages of non-invasion, non-ionization, and fewer complications after treatment. Over 100,000 cases have been treated throughout the world with great success.

This study says:
A variety of solid tumors have been tried on thousands of patients in the last fifteen years with great success.

This study says:
This study demonstrates the effective long-term cancer control achieved with HIFU in patients with low or intermediate-risk localised prostate cancer.

This study says:
Image-guided FUS is both safe and effective in the treatment of primary and secondary tumours.

This study concludes:
In this, the largest prospective series to date, we demonstrate that salvage HIFU for locally recurrent prostate cancer after failed primary brachytherapy has encouraging disease control results, albeit with a relatively high complication rate.

This study concludes:
We suggest that HIFU therapy is safe and has the potential to be a new method of combination therapy for PC.

This Review says:
FT offers a promising treatment option in the field of low to moderate risk localized PCa. FT might eventually become a ‘middle ground’ between active surveillance and radical treat­ment, combining minimal morbidity with can­cer control and the potential for retreatment.

From a 2010 study published in World Journal of Clinical Oncology:
In clinics, HIFU has been applied to treat a variety of solid malignant tumors in a well-defined volume, including the pancreas, liver, prostate, breast, uterine fibroids, and soft-tissue sarcomas. In comparison to conventional tumor/cancer treatment modalities, such as open surgery, radio- and chemo-therapy, HIFU has the advantages of non-invasion, non-ionization, and fewer complications after treatment. Over 100,000 cases have been treated throughout the world with great success.

This study says:
In clinics, HIFU has been applied to treat a variety of solid malignant tumors in a well-defined volume, including the pancreas, liver, prostate, breast, uterine fibroids, and soft-tissue sarcomas. In comparison to conventional tumor/cancer treatment modalities, such as open surgery, radio- and chemo-therapy, HIFU has the advantages of non-invasion, non-ionization, and fewer complications after treatment. Over 100,000 cases have been treated throughout the world with great success.

A variety of solid tumors have been tried on thousands of patients in the last fifteen years with great success.

This study says:
It can effectively alleviate cancer-related abdominal pain, and may confer an additional survival benefit with few significant complications.

This study says:
Image-guided FUS is both safe and effective in the treatment of primary and secondary tumours.

This study says:
The findings suggest that this novel technology can be used to induce SMMC-7721 apoptosis via the Ca(2+)/mitochondrial pathway and could potentially be of clinical use for the treatment of hepatocellular carcinoma (SMMC-7721 cell line) and other cancers. 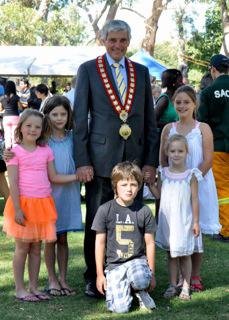 “It is 12 years since I was treated and have moved from a 58 year old to a 70 year old. For the last 6 years I have been mayor of my local city and I attach a photograph in regalia with my five grandchildren, all born since my treatment. You may use this also if you like to reassure potential patients that there is normal and interesting life after HIFU.”
-David Parkin

Patient Stories: Bill W.
A week after my HIFU I went to see Dr. Jackson, and everything looked fine. About two weeks later he removed the catheter, and things were pretty much back to normal. My most recent PSA was 0.45, and the one before that was 0.39.

HIFU Treatment for other types of cancer

Like all treatments, HIFU can cause side effects. These will depend on a range of factors including the type, stage and location of the tumor.

Pancreatic cancer
This 2018 Review includes the following:
HIFU has also been clinically evaluated for advanced-stage pancreatic cancer. The tumors appear to shrink in size due to the absence of blood supply, but the median survival time of patients was 11.25 months. Later studies on advanced pancreatic cancer (stage III or IV) treatment demonstrated good survival rates i.e., 52% for 6 months, 30% for 12 months, and 22% for 18 months. Further increase in survival rates (up to 82%) with significant pain relief (79%) has also been reported by Gao et al…

This study says:
Pain relief was achieved in 79.5% of patients…preliminary results demonstrate the safetyof clinical application of HIFU for pancreatic cancer and reveal it to be a promising mode of treatment for local advanced pancreatic cancers.

Brain Tumors
Brain tumor patients are those who have the potential to gain the most from Focused Ultrasound technology. As this modality is non-invasive and accurate, it has the potential to thermally ablate only targeted tissue while sparing healthy adjacent brain tissue, reducing the risk for infection and bleeding, lowering procedural morbidity by avoiding the need to open the skull and avoiding ionized radiation related toxicity.

In addition Focused Ultrasound allows a non-invasive, localized transient opening of the blood brain barrier, thereby enabling an increased drug delivery to targeted areas in the brain. This modality has the potential to augment effects of the currently used chemotherapies as well as enable the usage on new types of drugs.
Source: Focused Ultrasound Foundation

Uterine Fibroids
Focused ultrasound is a completely noninvasive way to treat uterine fibroids. Using this treatment modality in conjunction with image guidance, the physician directs a focused beam of acoustic energy through the patient’s skin, superficial fat layer, and abdominal muscles to thermally coagulate the fibroid tissue, thereby destroying it without damaging nearby tissue or the tissues that the beam passes through on its way to the target. Uterine fibroids can be visualized using ultrasound or magnetic resonance imaging (MRI).
Source: Focused Ultrasound Foundation

Liver Cancer
HIFU is a minimally invasive treatment for patients with
hepatocellular carcinoma; however, there are some systemic and local complications that
should be taken into consideration in evaluating HIFU for therapeutic use.

“We started to treat our cancer patients for their pain from bone metastasis with the Sonalleve MR-HIFU system. The results had been exciting from the beginning; most of our patients experience a very significant pain relief within a week of having the procedure”.
Professor Nandita deSouza, co-director of The Institute of Cancer Research, Sutton, Surrey, UK
Source: Philips

What are the side effects of HIFU?

Like all treatments, HIFU can cause side effects. These will affect each man differently, and you might not get all of them.

Short-term side effects
The following side effects can develop soon after your treatment.

Erection problems
Some men have problems getting or keeping an erection (erectile dysfunction) after HIFU. This is because it can damage the blood vessels and nerves that control erections. For some men this will improve, but for others this will be a longer-term side effect of HIFU.

Urinary problems
Some men find it hard to empty their bladder properly after their catheter is removed – this is called urine retention. This is because HIFU can cause the prostate to swell and block the urethra, which is the tube you urinate through.

Urinary problems
HIFU can cause longer-term urinary problems. You may have some of the following symptoms straight after treatment, or they might develop some time later.

A hole between the back passage and the urethra (rectal fistula)
Very rarely, HIFU can cause a hole between the back passage (rectum) and the urethra, which is the tube you urinate through. This is called a rectal fistula. It affects fewer than 1 in 100 men who have whole-prostate HIFU (1 per cent). It is slightly more likely if you’ve already had radiotherapy.

Signs of a possible rectal fistula include: