You are here: Home » Tests and Treatments » Antineoplastons

Antineoplastons were discovered by Stanislaw R. Burzynski, M.D., Ph.D. in 1967 who first identified their anti-cancer properties. Antineoplastons are naturally occurring peptides demonstrating ability to re-program cancer cells without destroying normal cells. Due to their low-toxicity and anti-cancer activity antineoplastons represent a revolutionary avenue in cancer research.

For over 35 years, Dr. Burzynski’s cancer research and patient care has been inspired by the philosophy of the physician Hippocrates: ‘First, do no harm’. Therefore, our approach to treatment is ‘personalized’ in an atttempt to maximize effectiveness and minimize side effects for each cancer patient.

Personalized medicine may include the combination of targeted therapies with conventional therapy. It may also involve the use of investigational agents (Antineoplastons), as approved by the FDA. Patients and/or their caretakers receive training for administering all therapies at home, as well as nutritional counseling.

Despite a track record dwarfing that of conventional cancer treatments, including outright curing some forms that, until now, were previously thought of as “incurable,” the government and the medical establishment has been fighting tooth-and-nail to prevent public knowledge of this technology…The Telegraph

This study says:
The results of this study compare favorably to the other trials in patients with RPDIPG [recurrent pediatric diffuse intrinsic pontine gliomas]. The survival data in most of these trials are nonexistent simply because patients do not usually survive more than 6 months.Contrary to the other studies, our PFS [progression-free survival] at 6 months is 35.3 % and overall survival from the treatment start at 1 year is 29.4 % and approximately 11.8 % at 2 years. Even at 15 years, the overall survival is approximately 5.9 %.

This study says:
The best results were observed in children with low-grade glioma, where 74% of patients obtained objective response, and in patients with adenocarcinoma of the colon with liver metastases whose survival rate of more than 5 years is 91% versus 39% in controls on chemotherapy

Case Study
This young man was 10 years old when diagnosed with low-grade astrocytoma in October 1997. Because his tumor grew in a difficult area of involvement, includ-ing the thalamus and brain stem, he was not a candi-date for surgery and did not receive any standard treatment . He began treatment with antineoplastons in April 1998. His contrast-enhancing tumor decreased and finally could no longer be seen on magnetic resonance imaging (MRI) in March 1999. Repeated positron emission tomography (PET) scans did not show tumor recurrence. This patient has made a complete recovery. When he came to us for the first time, he was partially paralyzed and in a wheelchair

This study involving patients with Anaplastic Astrocytoma (AA) a type of brain tumor, says:
A complete response was documented in 7%, partial response in 11%, and stable disease in 22% of patients. Progression-free survival and overall survival at 12 months was 26% and 41% respectively. The only serious toxicity was Grade 3 reversible hypokalemia in 7% of patients. There was no chronic toxicity and there was a high quality of life. ANP shows efficacy with very good toxicity profile in this cohort of patients with recurrent AA.

This study concluded:
The results of this study compared favourably with the responses of patients treated with radiation therapy and chemotherapy. The study continues with accrual of additional patients.

This study says:
CRs [complete response] in the NDIPG [non-diffuse intrinsic pontine glioma] group and very long OS [overall survival] with an excellent quality of life compares favorably to the results of standard treatment. Such cases are incurable and they die, despite the standard treatment, after suffering with a crippling disease. Excellent recovery, normal quality of tumor-free life, and a very long survival of a number of cases gives hope that in some patients, these tumors can be eradicated.

This study says:
The study reached the goal with 4 cases of CR in ITT population. It provides evidence-based research supporting the safety and efficacy of antineoplastons for the treatment of anaplastic astrocytoma which should be confirmed by further studies. More importantly, this treatment was found to be reasonably well tolerated.

This 2015 case study says:
This report discusses a case of a 13-year-old male diagnosed with tectal glioma who obtained a complete response and long-term survival after the treatment with antineoplastons (ANP) in phase II trial…Currently, over 20 years from his diagnosis and over 13 years from treatment start he is symptom-free and leads a normal life.

This study says:
We conclude that in this study antineoplastons have demonstrated a promising level of efficacy against postoperative recurrence with a median CSS [cancer- specific survival] time of 67 months in the AN [Antineoplastons] arm versus 39 months in the control arm, achieved via inhibition of early growth in metastatic tumors from colorectal cancer.

My name is Teresa Kennett. I was diagnosed with stage 4 cancer and given less than a year to live by my oncologist who also told me that conventional treatment could not cure me but could only temporarily slow the progression of my form of Non-Hodgkin’s Lymphoma.

I was a young mother with a three-month old baby girl. Desperately I sought other solutions and found Dr. Stanislaw Burzynski, whose non-toxic Antineoplaston treatment put my cancer into complete remission and saved my life.

That was over 27 years ago!

And I am not alone! Over 1000 cancer patients like Faye Joseph, MaryJo Siegel and myself (left to right above–Rita Starr, mother in remission over 20 years, Faye Joseph, in remission 4 years, Steve Siegel, Teresa Kennett, remission 27 years, Mary Jo Siegel remission 21 years) who previously received terminal diagnoses are alive today because they were treated by Dr. Burzynski. 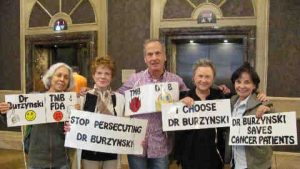 Pic from a petition on change.org

A woman who was given 18 months to live after being diagnosed with a rare, aggressive brain tumour is now cancer free. Hannah Bradley-Cohen, 30, from North London, was diagnosed with Anaplastic Astrocytoma in early 2011 and given 18 months to live. But she beat the cancer after treatment with a controversial American doctor and went on to marry her partner Pete – a day she thought she’d never live to see. (Daily Mail)

Here’s an interview she did with Anna Moore on 20 October 2013
Source: The Telegraph
“I was a salesperson when I was diagnosed with cancer. I ate on the run. I smoked. I had no real symptoms or warning signs. One night in February 2011 I had a grand seizure while I was asleep: arms up in the air, body shaking. My partner, Pete, called an ambulance, and I was rushed to hospital, unconscious. Eventually a CT scan showed a brain tumour, which turned out to be very aggressive, anaplastic astrocytoma.

I have no memories of that time, from the night of the seizure to coming around from the eight-hour operation to remove the tumour two months later. Looking back now, I was quite naive. I thought that once the surgery was over, the tumour would be gone.

Then I needed six weeks of radiotherapy, so I did that, thinking this would make me better. It was gruelling – my hair fell out, I had quite a few seizures – then, at the end, a scan showed I still had the remnants of this very aggressive tumour. The life expectancy for people with tumours like this was 18 months.

All this time, without me knowing, Pete had been looking into things, searching, talking to anyone and everyone who could possibly help. One name kept cropping up: Dr Burzynski.

At his clinic in Houston he has developed a treatment using anti-cancer compounds he discovered and now manufactures – and is treating aggressive tumours, especially ones in the brain. He’s controversial. The medical community claims his work is unscientific and unproven.

My oncologist didn’t want me to go – he wanted to monitor the tumour and maybe give me more radiotherapy in the future. But that was like containing it, not getting rid of it, and the treatment hadn’t worked so far. Dr Burzynski seemed to be my only hope of getting rid of the cancer for good.

The treatment wasn’t cheap (about £200,000). Of course we didn’t know 100 per cent whether it would work, but I had to believe in something; I wanted to be positive. Pete launched a campaign – friends and family gathered around, held events, our local radio station supported us – and in two months we already had £100,000, enough to start treatment. I’m still so thankful for all that support.

In December 2011 I flew with Pete to the Burzynski Clinic. The medication is administered directly into your body through a Hickman line 24 hours a day. We were there for seven weeks, and scans showed that in that time the tumour had reduced by 11 per cent. I was absolutely overjoyed.

Pete and I learnt how to prepare and administer the treatment ourselves and it carried on in Britain for another 18 months. It’s not an easy option. My blood was checked twice a week, and I was scanned every six weeks at a private hospital. Most importantly, it seemed to be working. The tumour kept getting smaller, and in January this year it was all gone. I’m now off the treatment but still being monitored.

Dr Burzynski isn’t a miracle worker. There are well-publicised cases of families raising money for children to be treated at the clinic but the children still tragically dying. People have posted on our website that it doesn’t work, but I’m convinced that, if we hadn’t found him, I wouldn’t be here today.

I wouldn’t turn my back on conventional medicine, but I would advise anyone in a situation like mine to look into other options – there could always be another way. If this whole thing has taught me anything, it’s that.” A cookbook by Hannah is available at teamhannah.com

Source: localsyr.com
Sophia celebrates her 16th birthday… but doctors once thought she would not live to see her second birthday because of a rare brain tumor called pineoblastoma. Surgery removed the tumor, but it grew back almost overnight.


Side effects from antineoplastons include the following:

The most severe side effects from antineoplastons occurred in a phase II trial in brain tumor patients that included sleepiness, confusion, seizures, and swelling near the brain.