Welcome to the only Irish website
that shares knowledge about
all the therapies and strategies
that can support recovery from cancer.

That knowledge can greatly increase
your personal odds of survival.

Most cancer deaths caused by metastasis.

It is estimated that metastasis is responsible for about 90% of cancer deaths. This estimate has changed little in more than 50 years, says this study.

CSCs have been shown in numerous cancer models to be involved in tumor development, cell proliferation, and metastatic dissemination, while possessing a capacity for sustained self-renewal. CSCs, which typically represent a small proportion of total cells of a given tumor, also exhibit resistance to chemotherapy and radiotherapy. Indeed, exposure to these treatments may promote “stemness” in nonstem cancer cells, which may explain why successful therapeutic reduction of tumor bulk will often fail to produce clinical improvement, says this 2016 study.

Senescence is the process by which cells irreversibly stop dividing and enter a state of permanent growth arrest without undergoing cell death.

According to this 2020 Review in Trends in Cancer, a significant number of commonly used cancer interventions have been associated with the induction of cellular senescence in either tumor or non-tumor cells and tissues.

Therapy-induced senescence can cause cancer metastasis and relapse and several adverse reactions to cancer treatments.

How can we target Cancer Stem Cells?

According to this 2020 study: Cancer stem cells (CSCs) contribute to the initiation, recurrence, and metastasis of cancer; however, there are still no drugs targeting CSCs in clinical application.

This scientific review says natural products, including those found in common foodstuffs have demonstrated the ability to modulate pathways responsible for Cancer Stem Cells function and inhibition.

How can we target Senescent Cancer Cells?

Senolytics are a class of drugs that selectively clear senescent cells (SC). Studies have identified the following compounds as Senolytics:

Cardiff University website says: This type of stem cell represents a small proportion of the types of cell found in a tumour, and can replicate tumour cells, causing tumours to grow and spread. Cancer stem cells are considered resistant to drug and radiotherapy treatments, and therefore can be left behind after the course of cancer treatment comes to an end, allowing the tumour to regrow and spread around the body.

Cancer stem cells (CSCs), which comprise a small fraction of cancer cells, are believed to constitute the origin of most human tumors. … Many studies also suggest that CSCs serve as the basis of metastases, says this study.

The Stem Cell Theory of Cancer

… many new anti-cancer therapies are evaluated based on their ability to shrink tumors, but if the therapies are not killing the cancer stem cells, the tumor will soon grow back (often with a vexing resistance to the previously used therapy). An analogy would be a weeding technique that is evaluated based on how low it can chop the weed stalks—but no matter how low the weeks are cut, if the roots aren’t taken out, the weeds will just grow back.
Source: Stanford Medicine

CSCs have been identified in over 20 cancer types to date, but it remains unknown how to target and eliminate CSCs in vivo, says this 2020 study

There is extensive preclinical evidence in animal models that nearly all types of cancer treatments, from surgery to chemotherapy and targeted therapy, can stimulate tumor spread, states this study.

This study says: Resistance to chemotherapy and radiotherapy has been observed repeatedly in CSCs. If CSCs are resistant to treatment, and treatment to destroy cancer cells succeeds primarily in killing only nonstem cancer cells, it may explain the phenomenon of successful therapeutic tumor shrinkage without a corresponding improvement in patient survival.

This study says: It appears that alcohol exposure not only promotes carcinogenesis but also enhances the progression and aggressiveness of existing cancers. 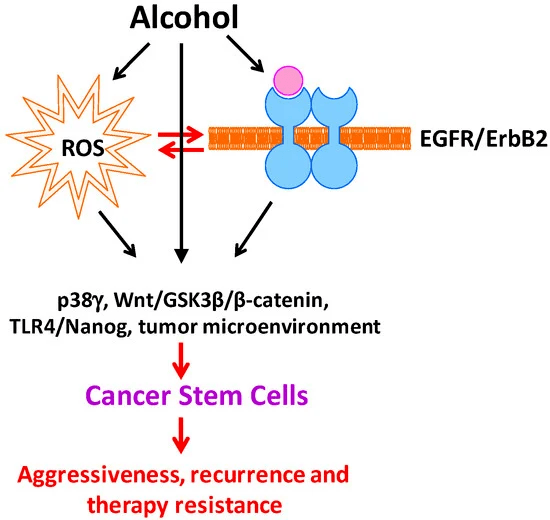 Senescence is generally regarded as a tumour suppressive process, both by preventing cancer cell proliferation and suppressing malignant progression from pre-malignant to malignant disease. It may also be a key effector mechanism of many types of anticancer therapies, such as chemotherapy, radiotherapy, and endocrine therapies, both directly and via bioactive molecules released by senescent cells that may stimulate an immune response. However, senescence may contribute to reduced patient resilience to cancer therapies and may provide a pathway for disease recurrence after cancer therapy. (read study)

While senescence can prevent tumour growth (cancer is characterised by unchecked cell proliferation), in the last few years the presence of senescent cells after cancer therapies has also been associated with relapse – source

This study, published in the Journal of the National Cancer Institute puts it this way: Treatment-induced Senescence in tumor cells induces several features that may be beneficial to the treatment of cancer. Importantly, senescence stimulates a persistent terminal growth arrest…

Cell division is important for normal growth and repair. Senescent cells, sometimes called ‘zombie cells’, lose that capacity and enter an enduring growth arrest. While senescence can prevent tumour growth (cancer is characterised by unchecked cell proliferation), in the last few years the presence of senescent cells after cancer therapies has also been associated with relapse. – source

This study concluded: Overall, cancer cell senescence is a Jekyll and Hyde phenomenon with both beneficial and detrimental implications. Despite a primary and immediate tumor-suppressive role against cancer development, the long-term consequences of senescent cancer cells are potentially deleterious.

About your cancer type